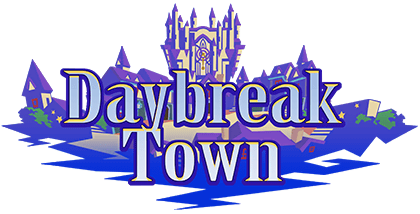 The Fountain Square (噴水広場, Funsui Hiroba?) is the first area in the world and also acts the the party's hub.

During seasonal events the hub version of the Fountain Square changes its appearance.

The door in the center leads to the Moogle Shop (モーグリの店, Mōguri no Mise?).

The stairs in the lower left corner of the Fountain Square lead to the 1st District (1番街, 1-Ban Machi?, lit. "1st Avenue").

Following the stairs on the right side of the Fountain Square the 2nd District (2番街, 2-Ban Machi?, lit. "2nd Avenue") can be reached.

Leaving the Fountain Square through the large gate on the left leads to Market (中央市場, Chūōshijō?, lit. "Central Market").

In the middle of the Market a door to the Warehouse (中央市場・倉庫, Chūōshijō Sōko?, lit. "Central Market: Warehouse") can be found.

The gate on the left side of the Market connects to the Avenue (郊外へ続く橋, Kōgai e Tsudzuku Hashi?, lit. "Bridge to the Suburbs").

Crossing the bridge to the left leads to the Boardwalk (海沿いの遊歩道, Umizoi no Yūhodō?, lit. "Boardwalk along the Sea").

The Boardwalk has two exits to the Waterfront Park (臨海公園, Rinkai Kōen?): on the upper left over the bridge, and the lower left through the park.

Taking the ferry from the Waterfront Park: Dock, the Beach (島のビーチ, Shima no Bīchi?, lit. "Island Beach") can be reached, which consists of four areas. A dusk and night version of Beach can be visited during the Summer Adventure event.

During the Summer Adventure event, taking a different ferry from the Beach would take you to a reef with shipwrecks.

Draining the water during the Shark Hunt creates a lower passage that connects the first four areas of the Underground Waterway.

During the Christmas Winter Party Event!, three areas are frozen.

In some quests, exterior areas can be reached through some Clock Tower: Level exits.

Moving up with the elevator leads to the Foretellers' Chambers (予知者の部屋, Yochi-sha no Heya?).

At the bottom of the Clock Tower lies The Basement (箱舟の間, Hakobune no Ma?, lit. "Ark Room"), which contains the lifeboat.

Somewhere in Daybreak Town a hall with fourteen adjoining rooms can be found.

There is a graveyard somewhere beyond the city area of Daybreak Town.

The Corridor of Darkness (闇の回廊, Yami no Kairō?) can be accessed at the Fountain Square during the Dark Corridor Trials, the Warehouse when visiting Enchanted Dominion for the first time, and Shipwreck Shore during the Summer Adventure event.